Nosopharm signs strategic partnership with INRAE and the university of Montpellier 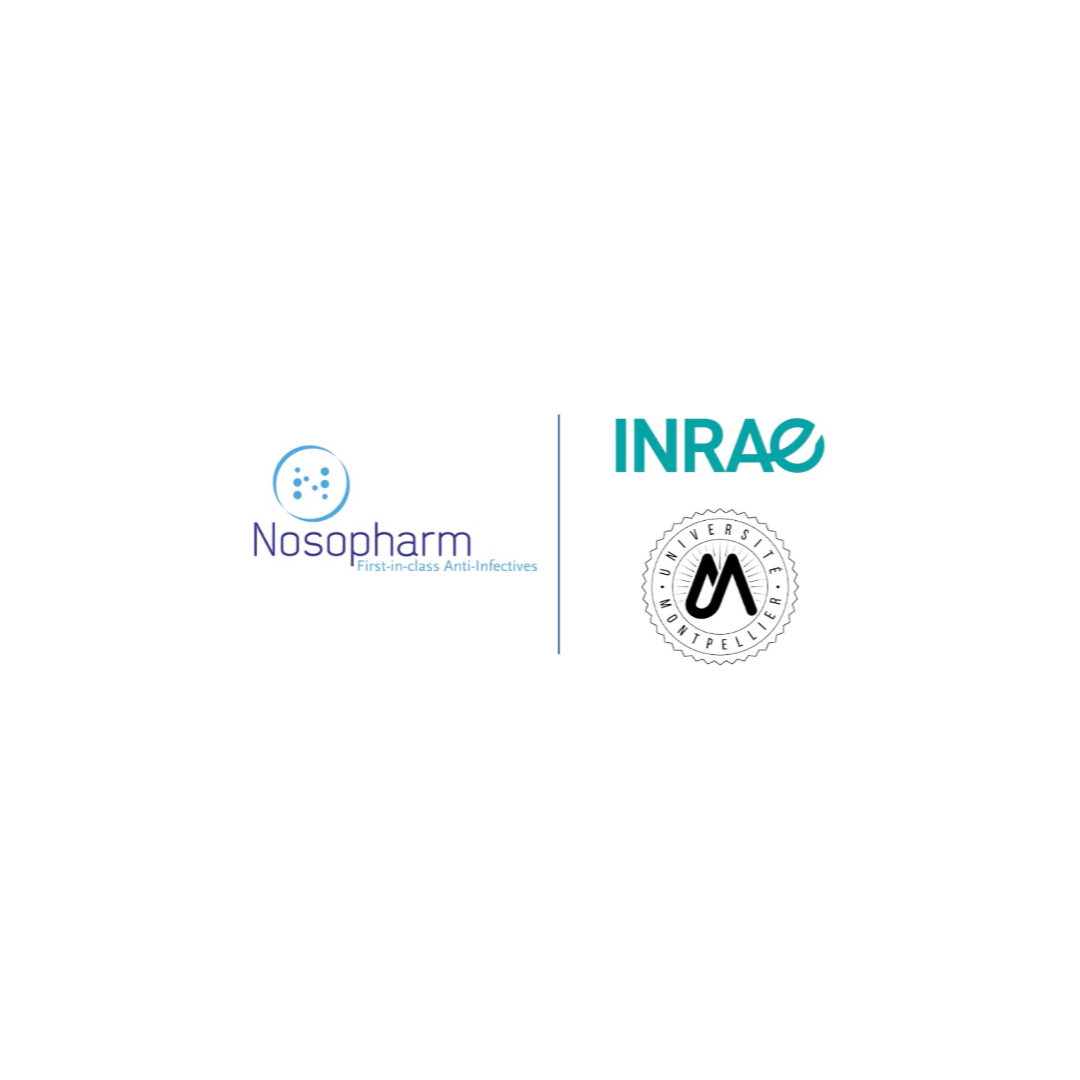 Nosopharm and its partner, the DGIMI laboratory (UMR INRAE—University of Montpellier), hope to establish joint laboratory in 2023

Lyon, France, March 15, 2022—Nosopharm, specialized in exploring unconventional sources of antibiotics to discover new drugs to fight antimicrobial resistance, today announces that it has signed a collaboration agreement with the DGIMI laboratory (UMR1333: Diversity, Genomes and Insects-Microorganisms Interactions). DGIMI falls under the authority of the French National Research Institute for Agriculture, Food, and the Environment (INRAE) and the University of Montpellier. The aim of this collaboration is to produce chemical libraries of new bioactive molecules which will feed into Nosopharm’s anti-infective screening campaigns against antibiotic resistance. ‘France Relance’, the French government investment plan created following the Covid-19 pandemic, brings financial support to this new collaboration between Nosopharm, INRAE and University of Montpellier.

Nosopharm and the DGIMI laboratory set up a research strategy with a view to cataloguing the entire range of specialized bioactive metabolites produced by the bacteria strains Photorhabdus and Xenorhabdus, as well as by strains frequently associated with them (microbiota of entomopathogenic nematodes), regardless of their biological activity. Those metabolites will be grouped into libraries that are compatible with biological activity screenings used to identify their potential applications for human, animal and plant health.

The production of specialized bioactive microbial metabolites is linked to the presence of Biosynthetic Gene Clusters (BGCs) in the genomes of microorganisms. Although many BGCs have been identified in certain strains of bacteria, little is known about the chemical structures and biological activity of the metabolites associated with them, in particular in Photorhabdus and Xenorhabdus. Often the primary obstacle to fully exploiting the potential of Photorhabdus and Xenorhabdus is an inability to identify all of the three elements (BGC, chemical structure and bioactivity).

“We are delighted to be collaborating with the DGIMI laboratory and its teams. This partnership will allow us to bolster our unique expertise in the pharmacological exploitation of the bacteria strains Photorhabdus and Xenorhabdus, which are used exclusively by Nosopharm. Our objective is to discover innovative anti-infective molecules with new modes of action in order to offer solutions in the ongoing fight against antibiotic resistance,” said Philippe Villain-Guillot, co-founder and CEO of Nosopharm.

“As a result of this collaboration, we will be able to fully exploit our original collection of microorganisms in order to facilitate the discovery of new anti-infective molecules, all against the backdrop of a global rise in antibiotic-resistance-related deaths. We will also be able to conduct some fundamental research into the role of these molecules in our tripartite interaction model, consisting of bacteria, nematodes and insects,” said Alain Givaudan, director of research at the DGIMI laboratory.

“The discovery of new molecules and their biological activity is crucial to understanding the interactions, both between microorganisms and between microorganisms and their hosts. This topic is a core component of our curriculum here at the University of Montpellier; this collaboration with Nosopharm will enable constructive interactions between the biotech industry and our pool of students. The exploitation of new natural molecule resources found in our environment seems likely to reveal its true potential in connection with the growing problem of antibiotic resistance, which will be a challenge for future generations,” added Alyssa Carré-Mlouka, senior lecturer at the University of Montpellier and associate of the DGIMI laboratory.

This collaboration brings together the DGIMI laboratory’s expertise in the molecular genomics and genetics of the bacteria strains Photorhabdus and Xenorhabdus and Nosopharm’s expertise in the production of specialized bioactive metabolites from the same strains. The partners initially plan to obtain proof of concept that the project is technically sound in genetic engineering terms. Then, they intend to optimize the yields of the new procedures. Finally, within the next 12 to 18 months they hope to set up a shared laboratory devoted to the chemical ecology of Photorhabdus and Xenorhabdus.

These new chemical libraries may also be made available to companies and third-party research institutes in connection with screening campaigns for new molecules of pharmaceutical and biotechnological interest. Small molecules actually play a huge role in the quest for therapeutic innovations. Of the 63 therapeutic products approved by the FDA in 2021, 36 were small molecules, which equates to 57%. As a result, biopharmaceutical laboratories are desperately trying to discover innovative small bioactive molecules to add to their portfolio of products under development.

The collaboration between Nosopharm and INRAE began as soon as the company was founded in 2009. It has resulted in the discovery of three new antimicrobial classes, for which three patent requests were filed. The patent for the Odilorhabdins class was granted in Europe, the United States, Japan and China. The collaboration has also resulted in five articles being published in peer-reviewed scientific journals.

The growing resistance of pathogenic bacteria to antibiotics poses a threat to global public health. According to an analysis published in The Lancet in January 2022, 4.95 million people worldwide died of diseases linked to antibiotic resistance in 2019; 1.27 million of these were a direct result of antimicrobial resistance. The infections caused by antibiotic-resistant bacteria are among the primary causes of death in all age categories, ahead of AIDS and malaria.

Nosopharm is developing a new class of antibiotics, Odilorhabdins, which inhibit the bacterial ribosome via a new mechanism of action. NOSO-502, the first clinical candidate in this new class, is intended for the treatment of nosocomial infections caused by Enterobacteriales, including those that are resistant to polymyxins and carbapenems (CRE). In 2017, the WHO identified CREs as a critical research and development priority.

Photorhabdus and Xenorhabdus are bacteria that live symbiotically with entomopathogenic nematodes. The genomes of these bacteria contain a huge amount of BGCs, which means they are capable of producing a very wide range of small bioactive molecules, called specialized metabolites. These small molecules allow the bacteria to interact with their hosts, the members of the nematode’s microbiota and their microbial competitors. The study of this chemical diversity and its role in interactions among microorganisms and between microorganisms and their environment is known as chemical ecology. The specific biological activities of these molecules can be exploited for use in human, animal and plant health. Although many of the BGCs of Photorhabdus and Xenorhabdus are known, there is still much to learn about the chemical structures of the molecules associated with them, as well as their biological activity.