Antibiotic resistance: Nosopharm and the University of Illinois at Chicago describe mechanism of action of new class of antibiotics in Molecular Cell 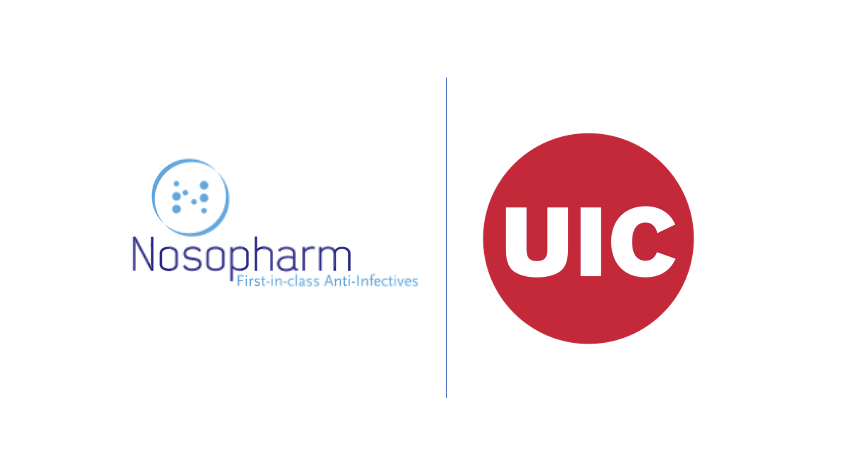 Lyon, France, and Chicago (IL), United States – April 5 2018 – Nosopharm, a company dedicated to the research and development of new anti-infective drugs, and the University of Illinois at Chicago (UIC) today announce the publication of a study in Molecular Cell on the mechanism of action of odilorhabdins, a new class of antibiotics to combat antibiotic resistance.

The antibiotic, first identified by Nosopharm, is unique and promising on two fronts: its unconventional source and its distinct way of killing bacteria, both of which suggest the compound may be effective at treating drug-resistant or hard to treat bacterial infections.

Called odilorhabdins, or ODLs, the antibiotics are produced by symbiotic bacteria found in soil-dwelling nematode worms that colonize insects for food. The bacteria help to kill the insect and, importantly, secrete the antibiotic to keep competing bacteria away. Until now, these nematode-associated bacteria and the antibiotics they make have been largely understudied.

The odilorhabdin program was launched by Nosopharm in 2011. To identify the antibiotic, Nosopharm’s researchers team screened eighty cultured strains of the bacteria for antimicrobial activity. They then isolated the active compounds, studied their chemical structures and their structure-activity relationships, investigated their pharmacology and engineered more potent derivatives.

The study, published in Molecular Cell1, describes the new antibiotic and, for the first time, how it works. Nosopharm’s Maxime Gualtieri, UIC’s Alexander Mankin and Yury Polikanov are corresponding authors on the study and led the research on the antibiotic’s mechanism of action. They found that ODLs act on the ribosome – the molecular machine of individual cells that makes the proteins it needs to function – of bacterial cells.

“Novel classes of antibiotics like the odilorhabdins are very difficult to discover, but then very interesting to investigate”, said Maxime Gualtieri, co-founder and chief scientific officer of Nosopharm. “Our research at Nosopharm is focused on the understanding of the pharmacology of this new class, and the elucidation of their mode of action is a part of this work. We accumulated several early evidences that the bacterial translation was the target of the ODLs. At this point, we needed complementary scientific expertise to investigate much more in detail the mechanism of action of the molecules. This was the purpose of our collaboration with the UIC.”

“Like many clinically-useful antibiotics, ODLs work by targeting the ribosome,” said Yury Polikanov, assistant professor of biological sciences in the UIC College of Liberal Arts and Sciences, “But ODLs are unique because they bind to a place on the ribosome that has never been used by other known antibiotics.”

“When ODLs are introduced to the bacterial cells, they impact the reading ability of the ribosome and cause the ribosome to make mistakes when it creates new proteins,” said Alexander Mankin, director of the Center for Biomolecular Sciences in the UIC College of Pharmacy. “This miscoding corrupts the cell with flawed proteins and causes the bacterial cell to die.”
While many antibiotics can slow bacterial growth, Mankin says antibiotics that actually kill bacteria, called bactericidal antibiotics, are rare.

“The bactericidal mechanism of ODLs and the fact that they bind to a site on the ribosome not exploited by any known antibiotic are very strong indicators that ODLs have the potential to treat infections that are unresponsive to other antibiotics,” said Mankin, who is also professor of medicinal chemistry and pharmacognosy in the UIC College of Pharmacy.

According to the World Health Organization2, antimicrobial resistance is one of the biggest threats to global health today and a significant contributor to longer hospital stays, higher medical costs and increased mortality.

In France, the Nosopharm researchers tested the ODL compounds against bacterial pathogens, including many known to develop resistance.

Carbapenem-resistant Enterobacteriaceae, or CRE, are a family of germs that have high levels of resistance to antibiotics. One study3 suggests that CRE, which are the common culprits in bloodstream and surgical site infections, contribute to death in up to 50 percent of patients who become infected.
The researchers say this study is a testament to the growing trend of international and cross-disciplinary collaboration, which is needed to combat the growing and global threat of antibiotic resistance.

“As a biotech company, Nosopharm has to focus on the pharmaceutical development of the ODLs,” said Philippe Villain-Guillot, co-founder and chief executive officer of Nosopharm.
“Collaborations with academia with renown expertise in antibiotics like the UIC team help us for this preclinical development and add credibility to the research”.

Collaborating on the research, which was funded by Nosopharm, are Lucile Pantel, Emilie Racine, Matthieu Sarciaux, Marine Serri, Jessica Houard and Andre Aumelas from Nosopharm; Tanja Florin and Malgorzata Dobosz-Bartoszek from the University of Illinois at Chicago; Jean-Marc Campagne, Renata Marcia de Figueiredo and Camille Midrier from the Institut Charles Gerhardt Montpellier in Montpellier, France; Sophie Gaudriault, Alain Givaudan and Anne Lanois from the Universite de Montpellier in Montpellier, France; Steve Forst from the University of Wisconsin in Milwaukee, Wisconsin; Christelle Cotteaux-Lautard and Jean-Michel Bolla from Aix-Marseille Universite in Marseille, France; Carina Vingsbo Lundberg from Statens Serum Institut in Copenhagen, Denmark; and Douglas Huseby and Diarmaid Hughes from Uppsala University in Uppsala, Sweden.